Last July, mom and dad made their way to London for the Olympics and then spent a few days traveling Germany and France. Dream vacation, right? Outside of getting married and having four lovely children, I’m convinced the best day of mom’s life was watching the Olympics at Wimbledon. Strawberries and cream and good tennis. What more could a girl ask for?

When they returned home, we celebrated with a dinner of fish and chips (in memory of London) and crepes with Nutella and sliced bananas (in memory of Paris). So yummy. They told us about making the kiss cam on the Jumbo-tron (multiple times…) and cheering on volleyball players with a group of Japanese tourists. We told them about Tim’s obsession with Michael Phelps and everything else we had watched from our comfy couches in the good ol’ USA. While we laughed, ate crepes, looked at pictures, and ate more crepes, I thought, “We should do this every Olympics, but before!”

Not exactly this, but something like this. A little get-together to celebrate the host country and the coming together of nations from all over the world to compete. Who doesn’t love the Olympics, seriously?

So we’ve put together some food options and games for your family and ours, to kickoff Opening Ceremonies this week, Russian style! 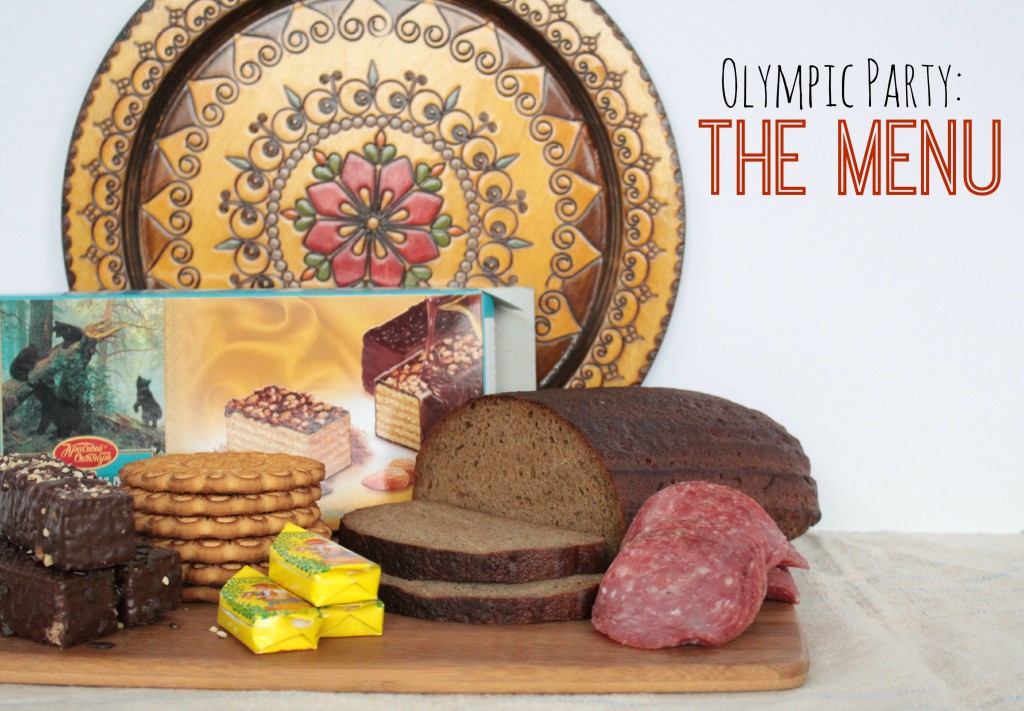 THE MENU: We went to a local specialty grocery store, Arbat, that imports lots of Russian (and other European) foods that you’re just not going to be able to find at the Smith’s down the street. (If you’re in the Salt Lake area, we highly recommend this place. It’s a tiny little shop with a lot of personality, and the Russian owners were super helpful and friendly. So fun! If you’re not, do some exploring. You’ll be surprised what you’ll find once you’re looking for it!) I explained what we were doing and that we were looking for kid-friendly Russian flavors. So caviar was out. Definitely out. Based on what they told us, here’s a list of suggestions:

As you can see in the picture, we also bought thin sugar cookie wafers that look lacy and pretty. (I’ll probably eat those with Nutella.) They’re not as sweet as most cookies that you would find in the USA, which I think is a bonus! We also bought those chocolate covered wafers and-my favorite: the Little Red Riding Hood chocolates! The store owner told us that the original Little Red Riding Hood story is Russian, and so these chocolates that have her on the front are common. And crazy good. Think Kit Kat with hazelnut flavored wafer in the middle, but with good milk chocolate. Yum. Yum. Highly recommended if you can find them!

For dessert, use sugar cones and orange sherbet. Are they Russian? Nope. But if you put on plastic gloves (or use a plastic bag on your hand), you can twist the orange sherbet into a cone shape and it looks like the Olympic torch!

GO FOR THE GOLD: All you need for this game is a bunch of small (the really small) cups and a large bag of M&Ms. The set-up for this game will really depend on how you want to do it and how many people will be playing. It can be fast and fun, or you can stretch it out and enjoy the M&Ms all evening. 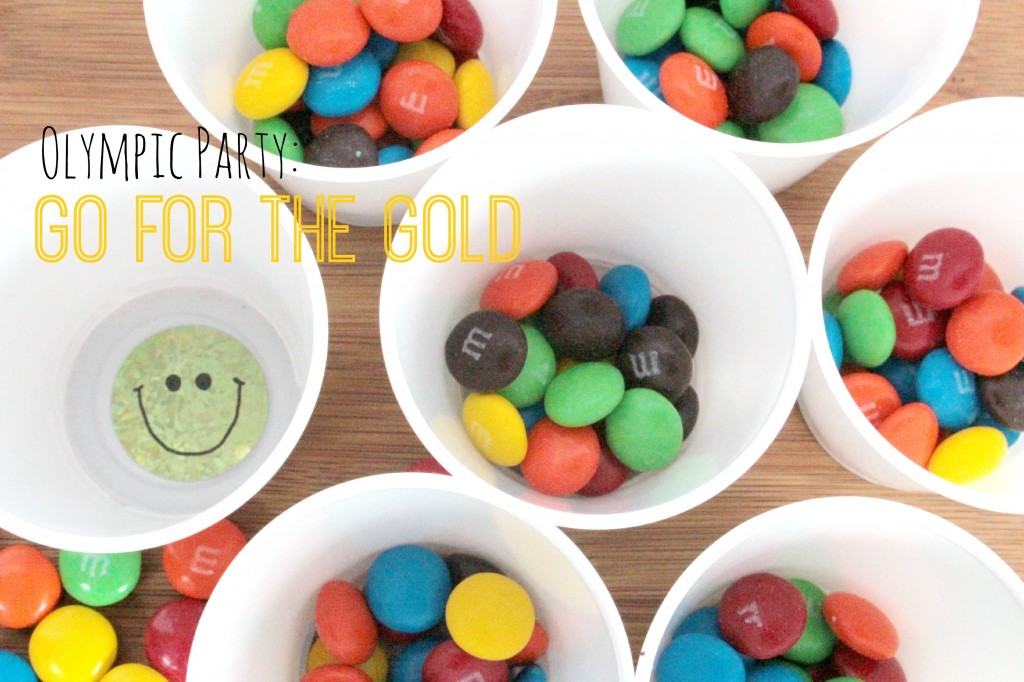 You’ll want several cups with M&Ms in them for each person participating (you don’t want to fill the cup, just put enough in to cover the bottom of the cup well). In one of the cups, you’ll put a gold star or smiley face on the bottom. That’s the GOLD-the winning cup.

For fast and furious, you’ll have everyone start chugging M&Ms, looking for the gold. But no one can pick up another cup without swallowing the M&Ms from the previous cup. To draw it out, you could play during the Opening Ceremonies and have people take turns selecting cups during commercial breaks. You can give a prize to the winner, or you can explain that everyone wins: they just got to eat a lot of M&Ms.

TAKING IT GLOBAL: A record of 88 countries is competing in the Winter Olympics (record for the Winter, not Summer Olympics). Zimbabwe is competing for the first time, represented by alpine skier Luke Steyn. Go Zimbabwe! 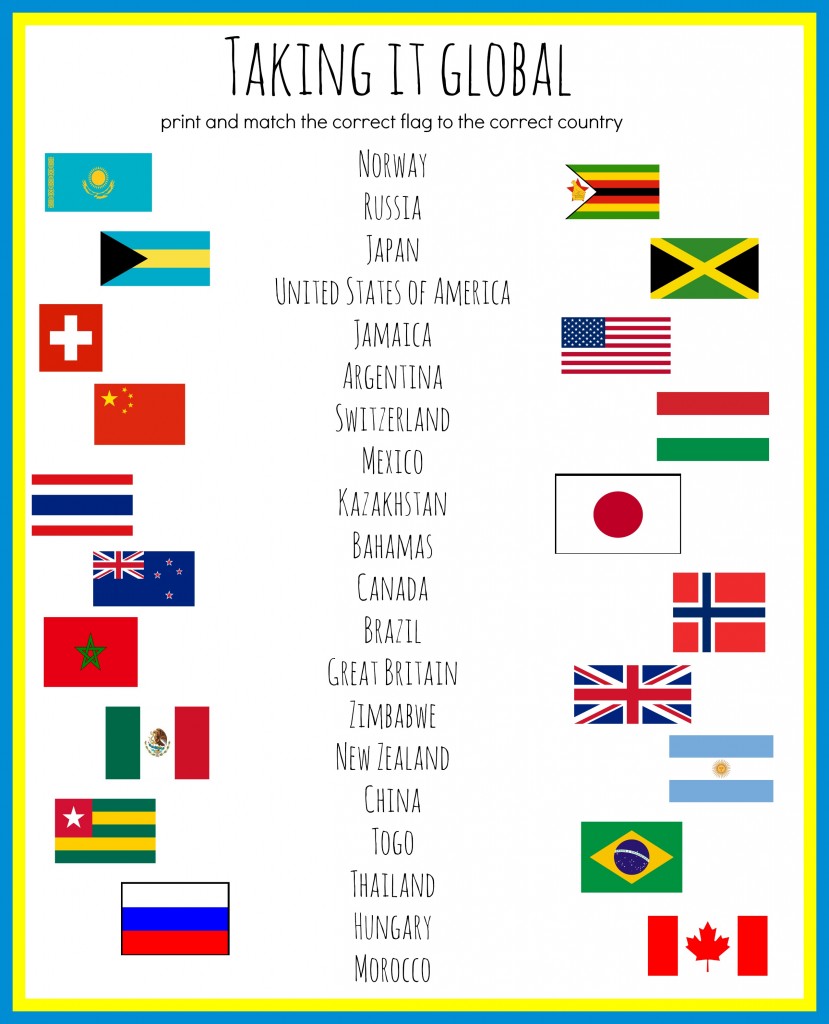 Print and pass out these sheets and see how flag savvy everyone is. Each country on this list is one of those 88 competing. You can find the printable here and the key here.

For the last piece of your Olympic celebrations, check out SOCHI bingo! It’s a free printable and can be played with any size group.

Three cheers for the Olympics!