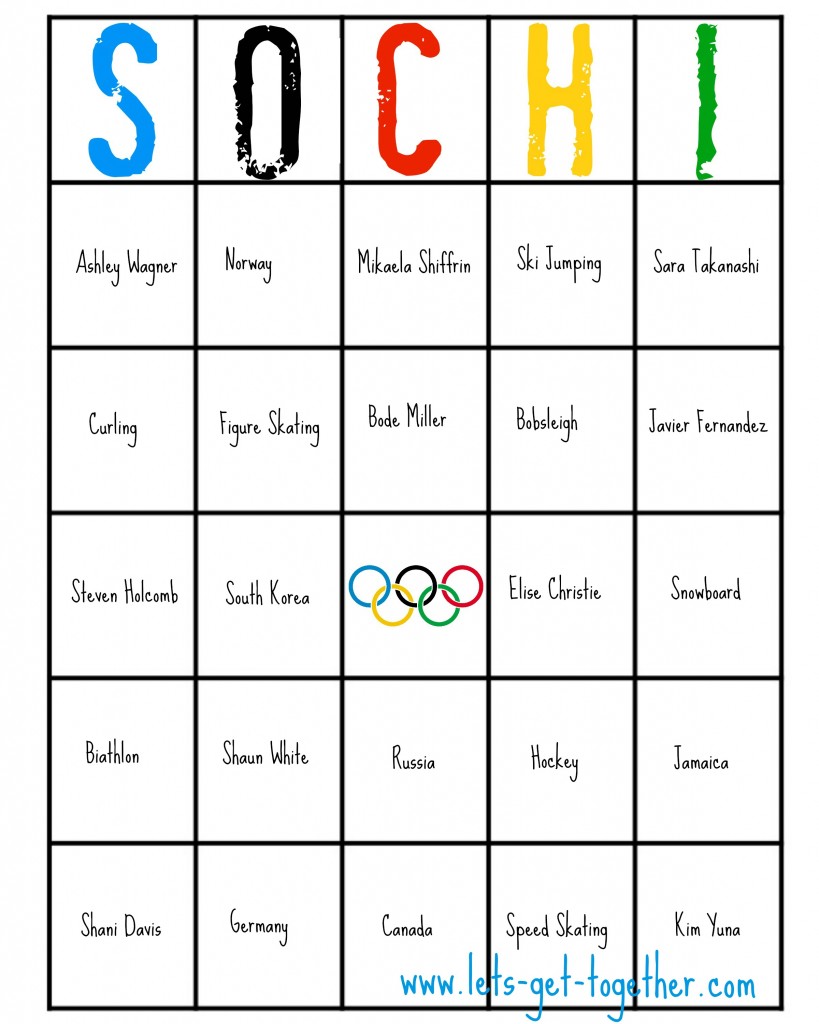 The first Olympics I really remember is the Atlanta 1996 games and the Magnificent Seven.

I wanted Dominique Moceanu’s bangs and my sisters and I would run and jump off of a couple of stairs onto a landing and reenact Kerri Strug’s golden moment. Arched backs and injured foot and all, we would salute the imaginary judges and critique each other on how well we stuck our landings. See, we’ve been Olympic nerds for a long time.

So instead of hiding it, we’ve decided to share it this year! (Minus the fake vault landings.)

This SOCHI (bingo) board is an easy way to add some interaction and games to your Olympic viewing pleasure. And it’s as easy as clicking “Print.”

So, when you go to print the board, you’ll notice that it’s blank. Don’t panic. This is not a mistake. 😉

You’ll also see a long list of Olympic related terms-including athletes’ names (both American and international), all of the Winter Olympic main sport categories, and a list of countries that all have representatives competing in the games.

The easiest way to get the terms on the boards is to pass a board and a list out to everyone who will be playing. Each person then fills up his or her board, selecting terms from the list and writing one into each space. (BONUS: No one can complain about getting a “bad” board. They created it!)

Then, as you watch the Opening Ceremonies or any Olympic coverage, you can be listening for the names, sports, and countries that are on your board. So this can be played in one sitting or across several nights. Play for five in a row, or play for blackout! Use M&Ms, pieces of paper, or mark the board with a highlighter to cover the spaces that have already been mentioned. The Olympic rings in the middle mark a free space for everyone!

It can be part of your Olympic Party, SOCHI style!