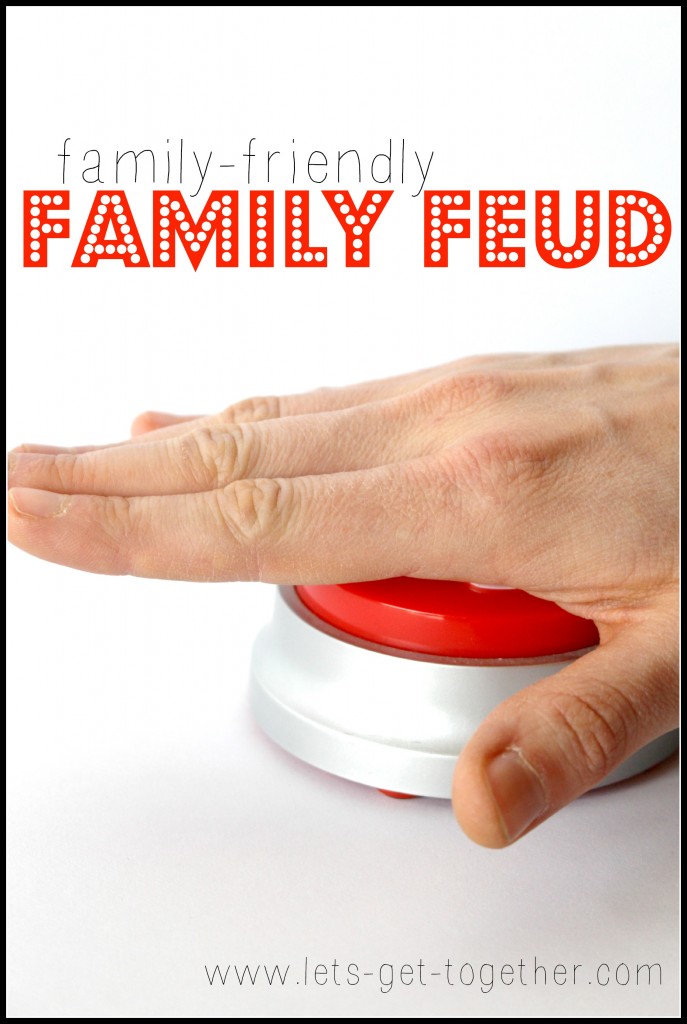 I’ve wondered a few times in my life what it would be like to be on Family Feud.

SURVEY SAYS: I don’t really want to find out. I’m pretty sure that I would have a mind blackout-either that or a laugh attack (probably because Kellie-sister #2- was already having one). Both of which would be mildly humiliating on national television.

To avoid the brain power outage and the giggles, I’ve decided that playing at home with friends and family might be more my style. This could be a great time for a couples game night, a Family Home Evening, or a youth activity.

So here’s how it goes…

1.    Divide the group into two teams.
2.    One member of each team faces the other in a face-off as the teacher reads a question.
3.    The team that buzzed in with the correct answer has the option of continuing to play the question or passing to the other team.
4.    The team that plays the question tries to reveal all of the correct answers to the question before receiving three strikes. (If the answer given is not one of the answers listed, it’s a strike.)
5.    If the team receives three strikes without clearing the board (providing all of the answers), control is passed to the other team.
6.    The team that now has the control is able to give one answer in the hopes that it is found on the board.
◦    If it is, points are added to the team’s score.
◦    If not, the other team gets the points.
◦    Each answer is associated with a number. That number represents how many people, out of 100, gave that answer. The team that wins the question round gets the number of points as answers that have been given.
7.     Designate a time for game play (maybe 30 minutes), and when time is up, the team with the most points wins.

Scenario 1: The first team maintains control over the question the whole time and gets 3 of the four correct answers-let’s say they guessed the beach, the pool, and the shower. Before they guess park, they get three strikes, but the other team fails to steal by answering correctly on their one chance. When that question round finishes, the first team would get 70 points for beach, 14 points for pool, and 4 points for shower, leading to a total of 88 points.

Scenario 2: If the second team, on their chance to steal after the first team got 3 strikes, came up with the correct answer of park, they would get all of the points, for a total of 97 points.

If you have questions, please just watch Family Feud. This was much more complicated to try and explain than I expected. 😉

Find a list of questions and answers, ready-to-print, for your Family-Friendly Family Feud game here.

***Questions and answers were compiled from here , here and here.
We’re excited to be linking up with the Real Housewives of Riverton today!