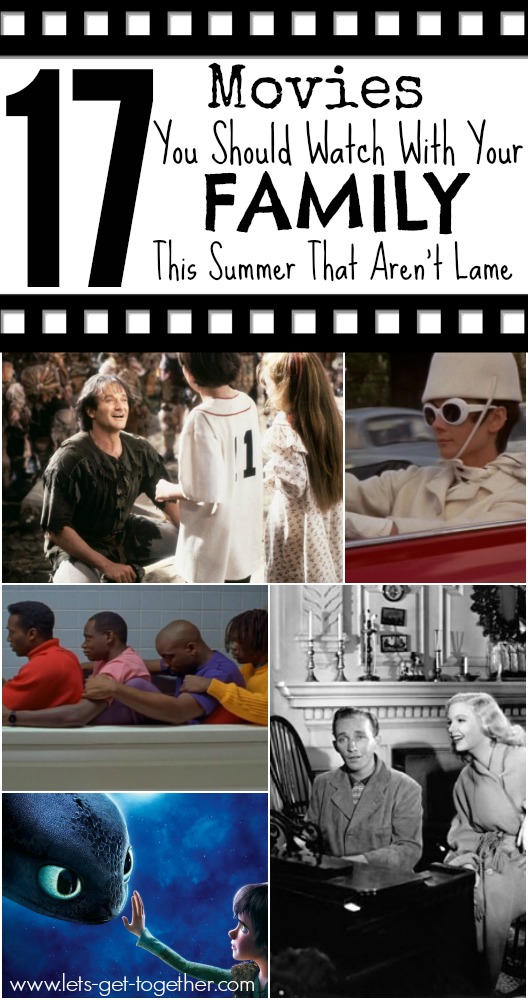 I’m really pleased to share with you this solid list of movies for your summer-family-viewing pleasure and introduce you to Adam Watson, a hilarious friend of mine who happens to blog about “not lame” family-friendly movies. Be sure to head over to his blog, Sunday Movies, to get full reviews for every movie listed below. I promise you two things if you do: 1) you’ll get some good info on a movie you can feel comfortable watching with the family and 2) you’ll laugh.

Yes, that’s a long title, but I felt obligated to add the “lame” clause since most movies presented as “fun for the whole family” are usually lame. (Sorry, Air Bud, you’re a talented dog and everything, but it just won’t work between us.)

I tried to mix it up a bit with my movie choices while staying within the non-lame family-friendly framework. Still, there’s a strong possibility that you will hate this list. I can live with that. And like Celine Dion, my heart will go on.

But if you can find a small place in your cinematic soul for even one or two of these movies, I guarantee you will be just a little bit happier, just a little bit closer to your family, and just a little bit more prepared if you’re ever in a life-or-death situation that rides solely on your knowledge of pre-1980s movie trivia.

Definitive proof that kidnapping women and hauling them off to the mountains will only make them love you.

A young Viking discovers dragons don’t have to be the enemy. He also discovers the secret island of the dragon queen (Please note the “-o-n” in “dragon queen”).

A nanny floats down to rescue an unhappy family and Dick Van Dyke proves that it’s okay to pull down your pants in public as long you’re dancing with penguins.

After an accident in the science lab at Medfield College, Kurt Russell becomes the strongest man in the world, not to mention the strongest man ever to give an uncredited Elvis impersonation in the movie Forrest Gump.

Two men fight over the same woman — you know, like Twilight without the high school drama, blood-sucking monster babies, or general sense of terribleness in every possible regard.

15 spotted puddles are stolen by a lady who looks like Skeletor’s mom.

An unlikely team of bobsledding Jamaicans head for Canada to compete in the Olympics and freeze their royal Rastafarian nay-nays off.

Life’s problems will instantly disappear if you just sit down and play the harmonica.

After being tricked by the Big Bad Wolf, Mother Goose gets stuck on an island with Goody Two Shoes and seven little girls. And it’s finally confirmed that Cary Grant takes naps in his underwear.

A Presbyterian pastor and a bunch of church ladies go undercover to take out local criminals, a gambling ring, and Skipper from Gilligan’s Island.

If you only watch one movie from the silent film era, make it this one.

Twins separated at birth find each other and concoct a plan to get their divorced parents back together, all while uttering hip phrases such as “Dirty darn” and “Nothing could be greater, say hey alligator.”

After being cursed by his last wife (who happened to be a witch), a wicked pirate is caught in limbo until he’s accidentally summoned by a track coach. Tumultuous times, the ‘60s.

A silent film studio and its actors are thrown for a loop when sound is introduced to motion pictures. Plus, one guy is super excited to see Zelda.

A peasant saves his village, an emperor saves his throne, and Kronk saves his spinach puffs.

Adam Watson is a ridiculously handsome blogger in his late twenties who loves his wife and 1.5 children. He enjoys skydiving, cliff-jumping, and hiking Mt. Everest on a semiannual basis. We’re kidding, of course. He probably just sits around and watches movies all day while pounding a bag of puffy cheetos. You can find his movie blog at sundaymovies.net.