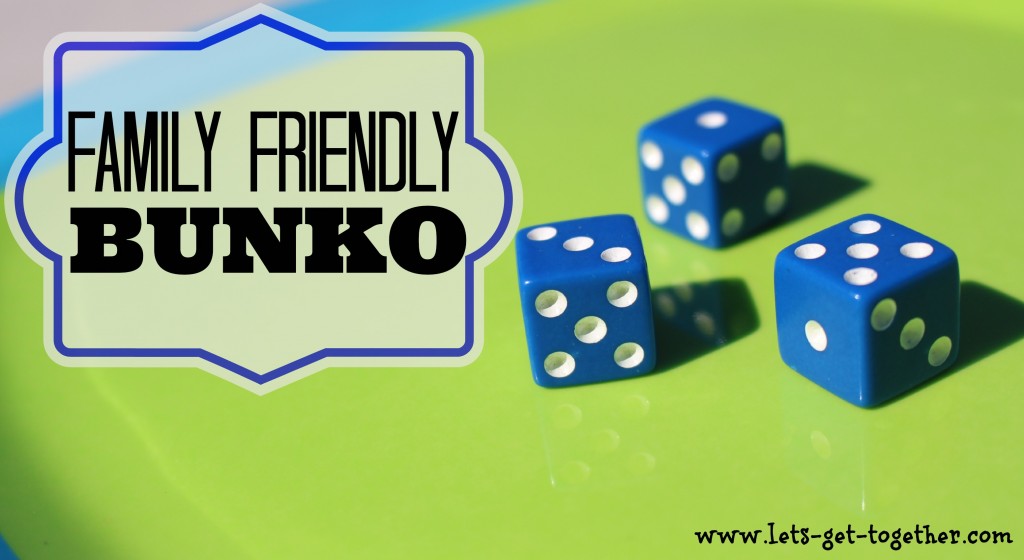 Just to make things clear right off the bat, the kind of BUNKO we play involves no gambling or money – only some dice, lots of friends and family, tons of laughing and excitement and some candy. Sounds like a pretty sweet combination, right? It is.

There are several things about BUNKO that our family loves:
– Pretty much everyone can play…you only need to know how to roll dice and count.
– It’s an awesome way to get people to mingle! You are constantly changing tables and partners.
– You can play it anywhere. We have played it at home, in backyards, in church gyms and even in the mountains. Talk about versatile.
– There is very little prep work and equipment.

For those of you that haven’t had the privilege of playing BUNKO before, here is a quick rundown. It sounds complicated but I promise you it isn’t!

Here is what you will need:
– At least 12 people, but ideally between 16 & 24.
– 3 dice on a plate for each table
– A BUNKO score card for every person playing
– A piece of paper and pencil at each table to keep score on

Each table has 4 people at it and the tables are numbered. So let’s say there are 20 people playing and 5 tables. 4 people sit at each table with two on each side of the table and 3 dice on a plate in the middle. The 2 people diagonal from each other are partners.

There are usually 3 sets of 6 rounds. On round one, each individual takes turns rolling the dice to try to get 1’s. They continue rolling until they don’t get any 1s in that roll. For each 1 they roll they and their partner get a point. You keep going around the circle trying to roll 1s until people from table #1 (this is a whole lot of ones…sorry about that) say stop. I’ll touch on that a bit more in a second. If you happen to roll three 1’s (so all the dice are 1’s) you get a BUNKO and you will mark that on your score card. A BUNKO is worth 21 points. If you roll 3 of a kind of a number that you aren’t trying to get (so for the first round you are going for 1s, but you might roll three 4’s) then that is called a THING and you can mark that on your score card. A THING is worth 5 points.

Now to explain a bit more about table #1 – they are a little special since they are the top table.

So if you are on any table other than table one you just keep rolling the dice until you are told to stop – even if someone on the table gets a BUNKO. If you ARE on table #1, you are in charge of the game. The round stops when someone at table 1 gets a BUNKO or if one of the teams reaches 21 points. At that point they will yell STOP and everyone stops and the tables figure out who won that round by looking at the points.

The two people that won the round, meaning they rolled the most 1’s during round one, will move up to the next table. So if they were at table 4, they would then move to table 3. The losers stay at the table. You can’t have the same partner twice in a row so make sure you mix up where you sit at the table. The only change in this is that if you are at table #1 the winners stay and the losers move down to the bottom table, in this case table #5. On your score card you will either circle or cross off the number 1 on the far left depending on if you won or lost.

The next round will start with someone at table 1 yells go and then everyone starts rolling for 2’s. You play it the same way, working with the person diagonal from you and keeping track of the number of 2’s your team gets. Again, if you roll three 2’s you get a BUNKO and if you roll 3 of a kind of any other number you get a THING. Be sure to mark those down on your score card.

Then if you’d like to have something small for everyone else you can, but that isn’t necessary. We usually give out some candy to everyone that played and some $5 gift cards to those that won the bigger prizes.

So – that’s BUNKO. Try it out! It is a blast and a great way to get everyone talking and laughing together.