A couple months before my son’s 4th birthday I had a great, simple idea for a Cars-themed party.

And then he turned Batman on me. Haha.

Thus was born the “Superhero Training” party! Much of the inspiration for this party came from the fact that my husband works for Cricut – I thought it would be fun to make superhero capes for the kids with iron-on vinyl superhero logos. My mom came to the rescue and sewed the capes for me, my mother-in-law made the cupcakes for us, and my whole family came to help with the party. Needless to say – this superhero party happened because of behind-the-scenes superhero help.

When the kids arrived, my husband “measured” them for their capes and let them choose one of 3 pre-designed superhero logos – Batman (or Batgirl), Superman (or Supergirl), or a lightning bolt logo he designed. Then while we were partying away downstairs, he and the other son-in-laws were working away getting the capes ready.

It was the middle of the afternoon (snack time at our house), so we had apple slices and superhero graham crackers for the kids to munch on in between activities.

When the kids came in each child received a Superhero Training checklist with the activities we’d be doing. You can find and print your own here. 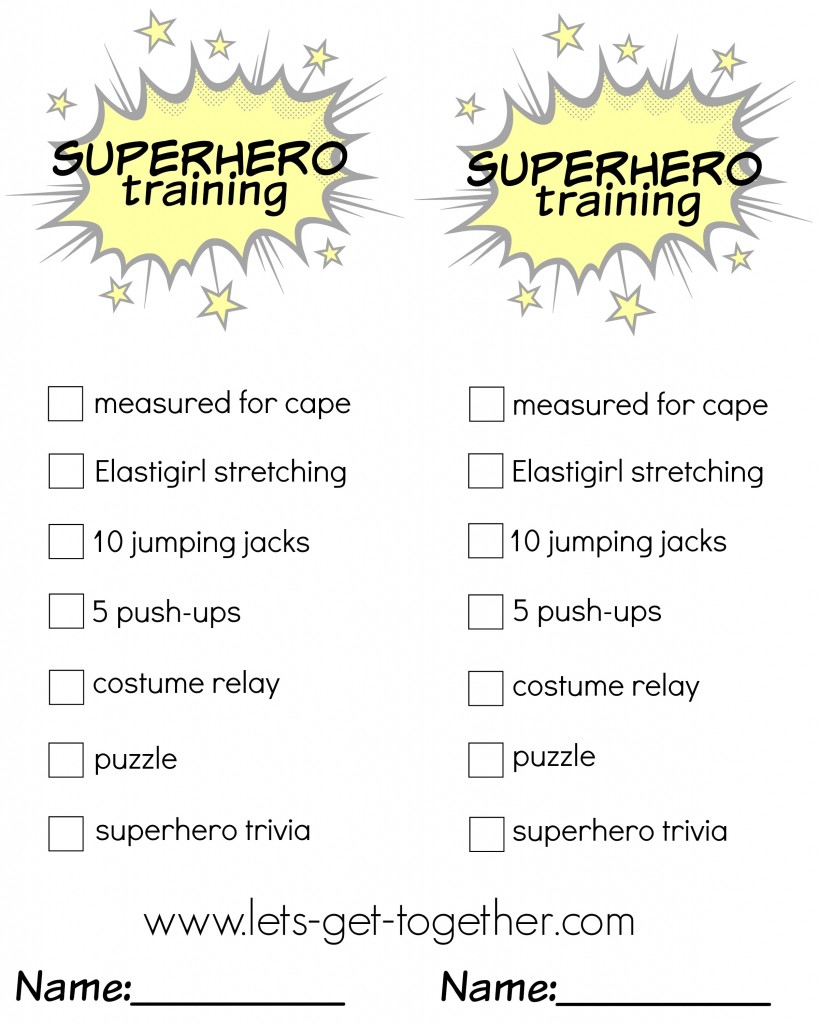 If the weather had been better, we would have done a superhero obstacle course with things like “Man of Steel” (Superman) monkey bars, “Dash” to the fence and back (Incredibles), slide down the bat pole (Batman), etc.

Since we were inside, we chose to start with “Elastigirl stretching” (Incredibles), jumping jacks, and push-ups.

For the other three activities we split the kids up into two teams: a costume relay (with a cape, boots, gloves, and mask – try to make it as equal as possible), putting a puzzle together – because superheroes have to piece clues together to solve puzzles (it’s best if you can find two of the same puzzle or at least two that are the same size, number of pieces, and difficulty), and then superhero trivia they could answer as a team (we threw in a few Frozen questions at the end for the girls at the party). You can find our ten trivia questions and answers here.

After each activity, the kids found a grown-up in the room to check off that item on their Superhero Training checklist.

My husband made some easy cupcake toppers (you can find a sample of them here) with the Cricut Explore’s Print then Cut feature. But even if you don’t have a Cricut machine, you could make them with a color printer and some good ol’ scissors. Simply find images online, copy and paste them onto pretty much any text or photo editing program (it works on Microsoft Word), and print two copies for each image – one regular image, and one of the image mirrored. Cut them out, tape them back to back, and wah-lah! Easy cupcake toppers. 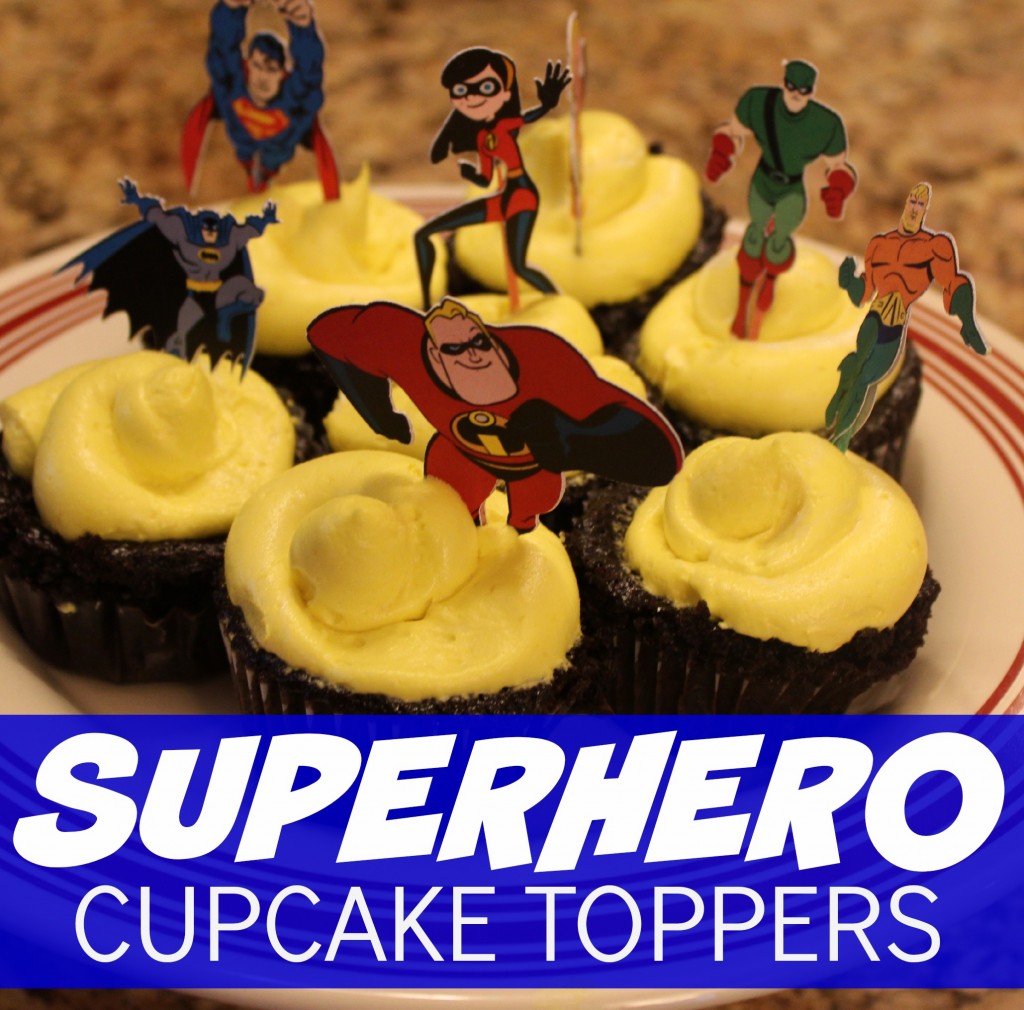 After presents, and cake and ice cream, the capes were ready!

My husband called each child up one at a time, congratulated them on completing their superhero training, and presented them with their capes (while the rest of us clapped and cheered). 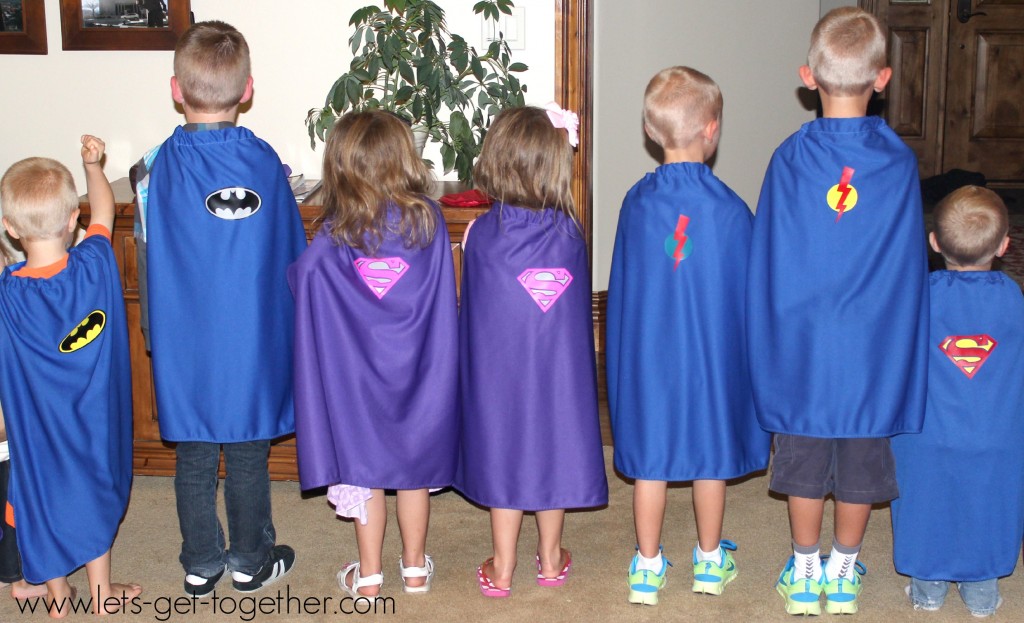 The capes were their party favor. You can find instructions for the cape here. For a no-sew version, if you use a ponte knit and get a clean cut, you don’t even have to hem it. You can also use fabric adhesive to attach the neck tie instead of sewing it on. Look for a JoAnn’s 50% off coupon and you can get a lot of capes for your money!  The images on the back were made with a Cricut and iron-on vinyl. It’s great to have a party favor kids can keep using! (a couple kids used them for their Halloween costumes!) 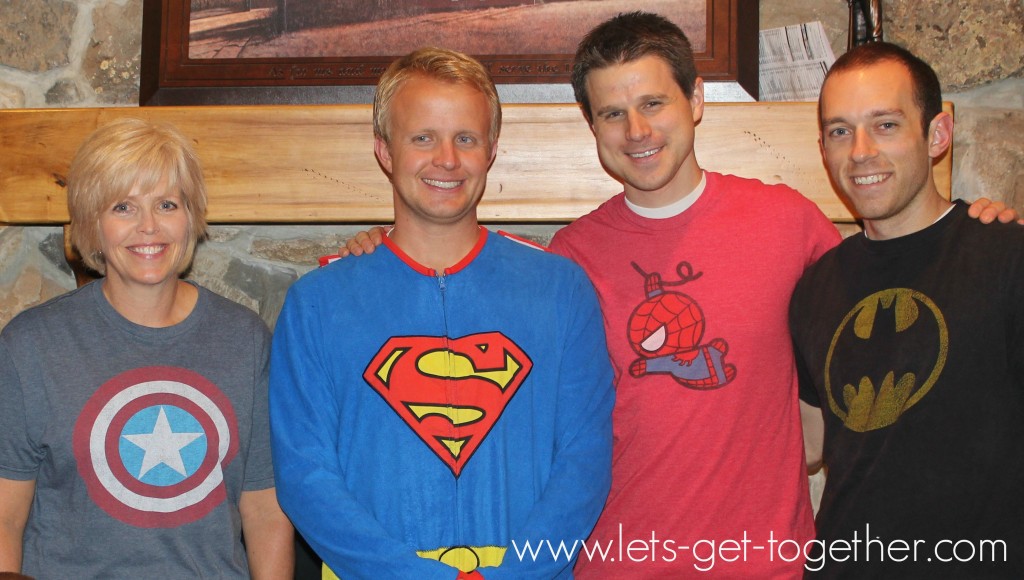