(That third picture pretty much sums up how we feel about dessert around here. Yeah! Get it!)

I have kind of dreaded writing this post-not because I dreaded the little guy’s first birthday-but because I pretty much end up with a crying hangover every time I try to talk or write about him or this great and crazy blessing called motherhood. I’m a total bawl baby like that.

For baby boy’s first birthday, there was only one thing that I was completely sure that I wanted to do, and it was this book of wishes. Many, many moons ago, my mom did a similar thing for me when I turned one. And now I have this lovely little page in my baby book that has an envelope full of wishes from people who loved me and wanted the very best for me. Once I could actually read and understand-on some level-that the words were for me, those words made me feel special. 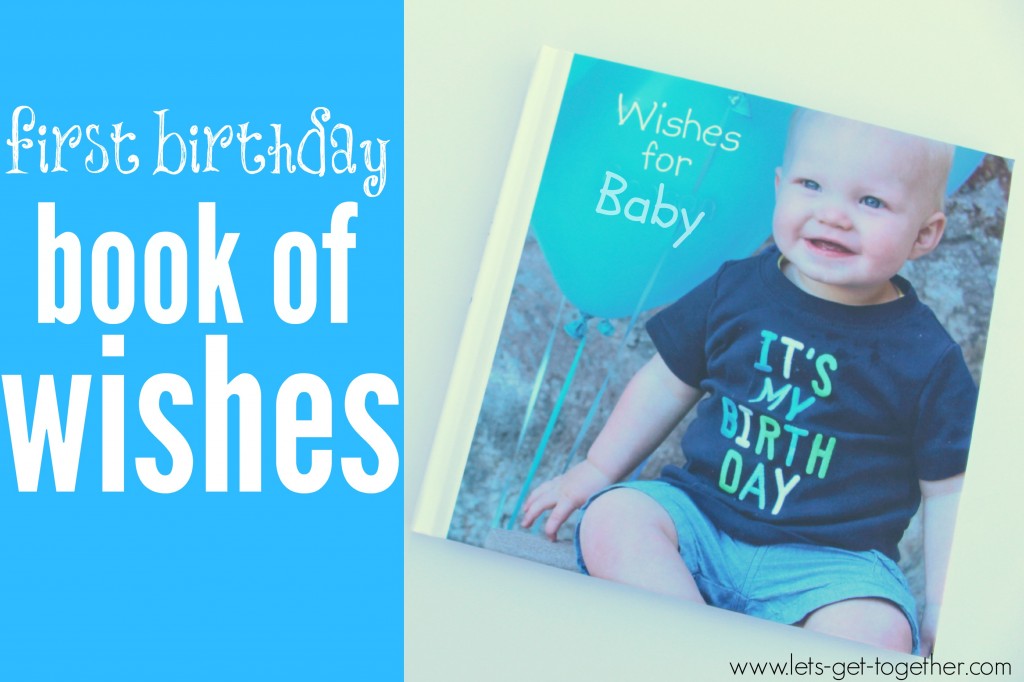 I would pull out my baby book often, usually on Sunday afternoons, and pull out the pink papers that wished me happiness, success, and every other good thing.

So, about a month before the big day I emailed family and a few close friends  and asked them to write a wish for baby boy. As the emails came in, it proved-once again-that I’m a big bawl baby.

There were wishes from great-grandparents and three-year-old cousins and everyone in between. I loved them all-the funny ones and the profound ones. The short and sweet and the full letters. Here are a few highlights (but remember, I LOVE them all!!):

My wish is that he will have a ball, glasses, and Jesus.

My wish for you is that you depart from the foolish tradition of your father and become a Jazz fan.

That he will have joyful courage in standing as a witness of God at all times and in all places.

I did my book on Shutterfly-and it’s a little 8×8 book. It’s also the baby book that I never had the self-discipline to sit down and update on a regular basis over the first year. The pictures start with the day he was born and move forward chronologically. I love it. I will pretty much have to make sure he doesn’t touch it for the next five years so it survives him. But I love it.

I knew that at our little family party I wanted some kind of game. (If you haven’t picked up on it yet, we are game people. And in a minute, you’re going to pick up on the fact that we are dorky game people.) 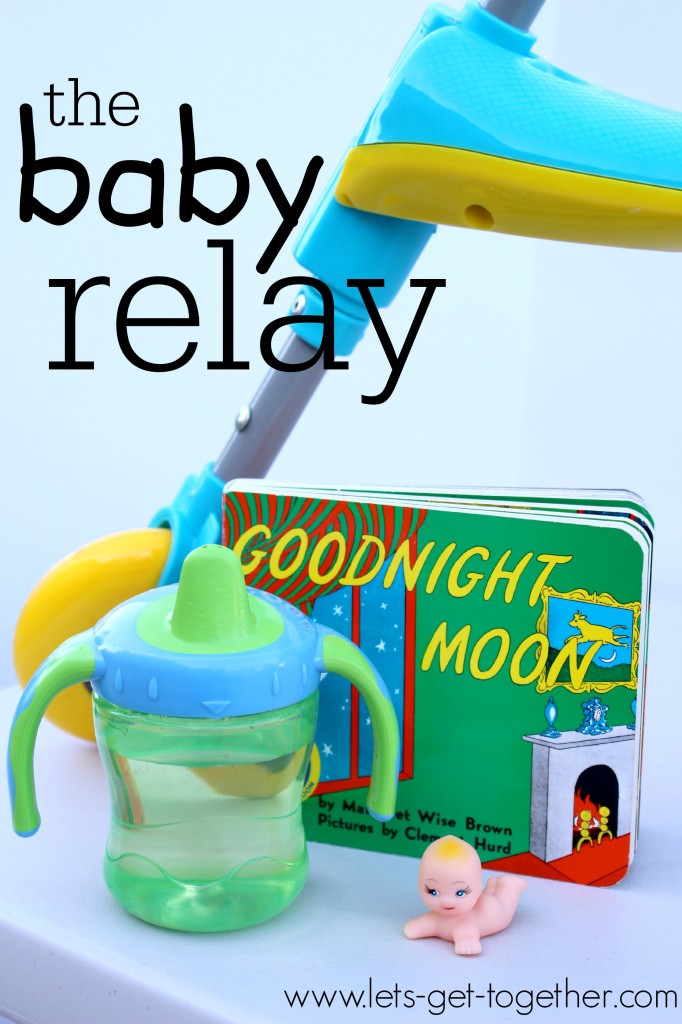 This takes very little prep work, mostly because you probably have just about everything you need if you already have a baby. You’ll want to split up into two teams. I gave each team a list of the things they had to do. Because we just had one Goodnight Moon book, the teams could do the tasks in any order-but they had to start with the crawl and end with the slide. Each task had to be completed once by each team-it wasn’t the kind of relay where every person has to do every task.

Our relay had six parts:
1. crawl across a certain span of lawn
2. find the baby in the toy box (we had two crates of toys and had tossed in one of the plastic babies you see in the picture above in each crate-you have to find the baby and then put all of the toys back in the crate to finish the task)
3. read Goodnight Moon out loud
4. drink all of the water from a sippy cup (we had two of the same sippy cups, both filled up to the top-one for each team)
5. scoot a trike across a certain span of concrete (we did ours just across the basketball half-court out back and had two trikes)
6. slide down the slide

Now, in most relays, there is some kind of baton or hand-off. We used an adult diaper. So, to complete your task, you had to have the diaper on-over your clothes, of course. And you gave the diaper to the next team member before they did their task. I would have put it in the picture, but there’s just no way to make an adult diaper look cute/not creepy. But I have to tell you-it was the BEST part of the relay. Hi-lar-i-ous.

I would also post pictures of us doing the relay, but the best ones were of the husbands. And with future employers checking online profiles, we just have to keep those under wraps, if you know what I mean. Just close your eyes and picture a grown man with a diaper on over his clothes drinking a sippy cup. Could. not. stop. laughing.

I had the toy crates, the book, and the sippy cups spread out across a table. I found the little babies at Hobby Lobby in the baby shower section for $2. Your only other cost will be a small pack of adult diapers that you can hold onto for the next couple of decades until they’re necessary…

Anyway, it was a screamin’ good time. People were hesitant when I told them the hubs and I had thought up a little game-probably because they know we’re dorky game people, but fun was had by all. It was perfect for a first birthday party but it could also work for a baby shower if you invite the kind of ladies who are not-so-shy and okay with doing more than nibbling on croissant sandwiches.

Okay, now, the really exciting part. For the last couple of months, baby boy has been sporting these rocking fold down high tops from Fledge Feet. 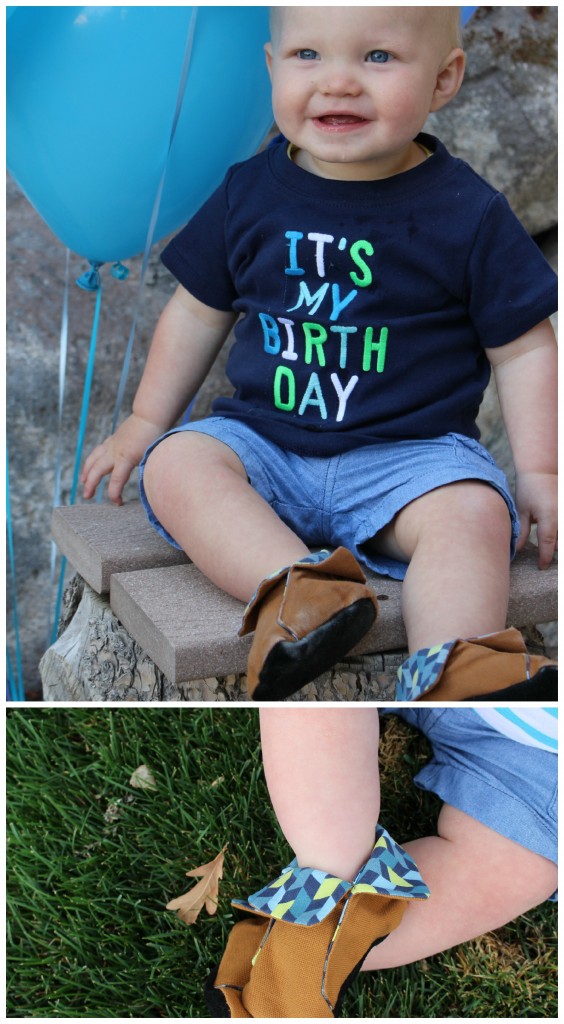 And I’m totally in love with them. Not only are they crazy cute (we get asked about them everywhere we go!), they also manage to pull off a minor miracle.

They actually stay on his feet. And he doesn’t even try to pull them off.

And the good news… drum roll please… is that one lucky reader is going to win a pair. (You can thank Callie-the brains and the beauty behind the shoes!) Have a baby? Having a baby? Know a baby? (aunty, grandma, friend?) Yeah, this one’s for you. 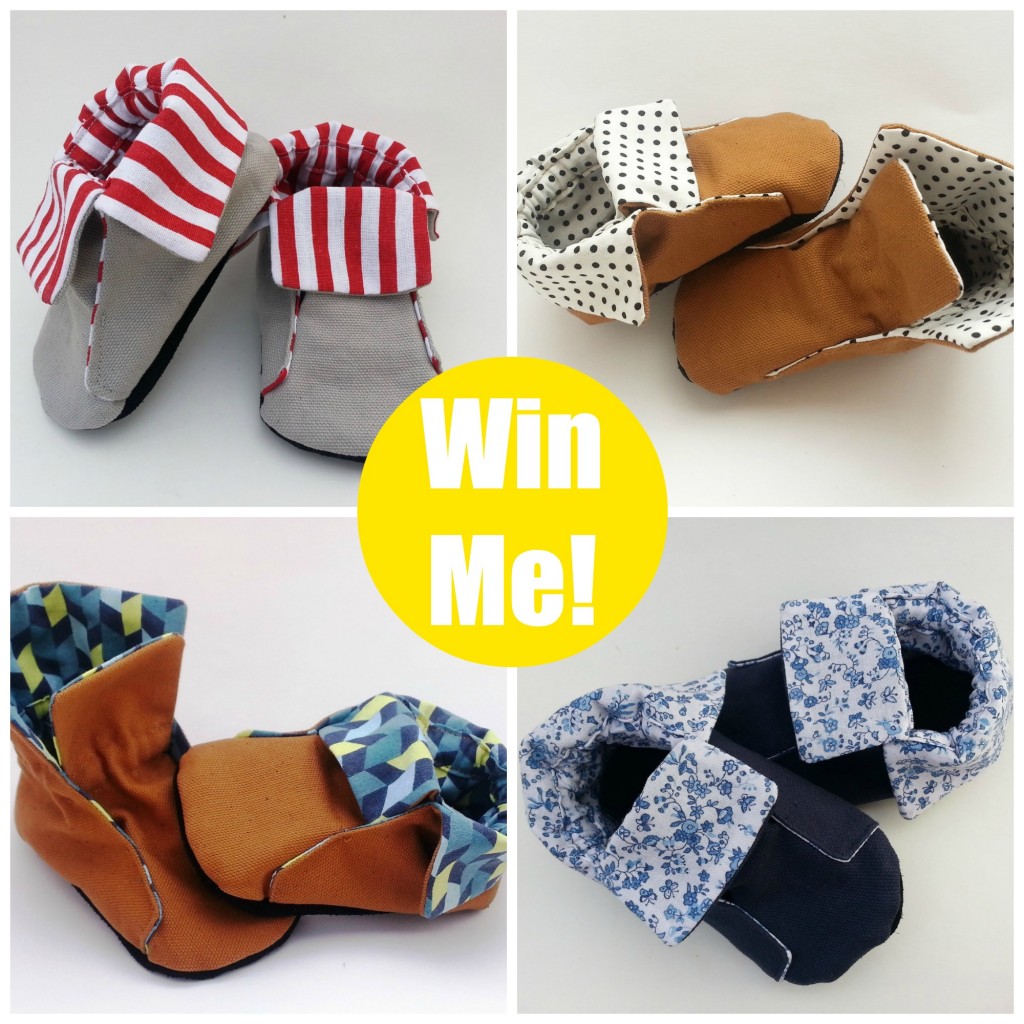 Tons of colors and prints, you can even customize to get just the look you want. Baby boy is stumbling through his first steps, and these-unlike so many other shoes-don’t give him any trouble because of the soft sole. Love these shoes!!