It’s almost St. Patrick’s Day and time to get your green on.  There’s nothing quite like being in Chicago for this Irish holiday with the dyeing of the Chicago River emerald green and one of the country’s largest St. Patrick’s Day parades. While living in Chicago we became leprechaun experts and a bit Irish at heart!  (Natalie THINKS she almost caught a leprechaun that jumped out of our fish tank)

Here’s how we party on St. Patrick’s Day:

1. Don your best GREEN OUTFIT – or a kilt if you dare!  We made this a contest-the most green wins! You should have seen the green garb.

2. Put a LUCKY SHAMROCK (sticker or drawing) underneath one of the dinner or dessert plates.  The winner gets a prize because they’re just soooo lucky.

3.  Enjoy these FUN IRISH SAYINGS. (Put around the table for fun conversation.)

You’ve got to do your own growing, no matter how tall your father was.
Continual cheerfulness is a sign of wisdom.
The stars make no noise.
You’ll never plough a field by turning it over in your mind.
Who gossips with you will gossip of you.
A good laugh and a long sleep are the two best cures.
The longest road out is the shortest road home.
It is often that a person’s mouth broke his nose.
If you’re lucky enough to be Irish, then you’re lucky enough.
Don’t give cherries to pigs or advice to fools.
A silent mouth is sweet to hear.
It is better to be a coward for a minute than dead for the rest of your life.
Put silk on a goat and it is still a goat.
A cabin with plenty of food is better than a hungry castle.
A best friend is like a four leaf clover: hard to find and lucky to have.
Don’t be breaking your shin on a stool that’s not in your way.
Here’s to eyes in your head and none in your spuds.
Firelight will not let you read fine stories, but it’s warm, and you don’t see the dust on the floor.
Take the world nice and easy, and the world will take you the same.
Here’s to your roof, may it be well thatched. And here’s to all under it – may they be well matched.

4. TATER TOSS (Potatoes are a staple in Ireland.)  This is like the egg toss game. Everyone goes outside and lines up facing their partner. One person of each two-person team tosses a potato (big Idaho spud) to their partner. If they do not drop the potato they step apart and the toss is repeated. If the potato is dropped that team is out. The remaining teams keep tossing and stepping back til one team remains and completes a toss of the furthest distance.  They are the winners. 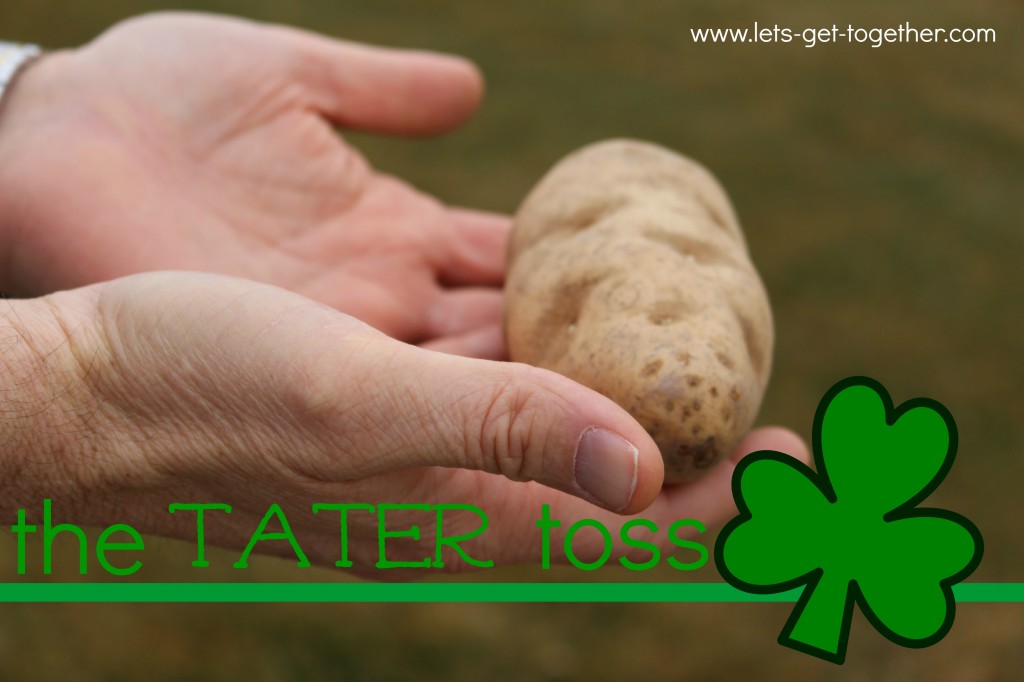 5. WRITE A LIMERICK ABOUT ST. PATRICK’S DAY.   Grab a partner and get creative.  A limerick is a funny little poem containing five lines. It has a distinctive rhythm and rhyme pattern: the last words of the first, second, and fifth lines all rhyme with each other.

There was a quick lad named Joe,
Saw a leprechaun when he started to mow,
He reached for the elf,
Heard a rip round his self,
His pants split and needed a sew!

Set the timer for a few minutes. When time is up read aloud the funny poems, and everyone gets to vote for their favorite limerick without knowing who penned it.  Add up the votes and that twosome wins.

6. HOW IRISH ARE YOU? (A fun and informative trivia game about Ireland. Most correct answers=winner!) 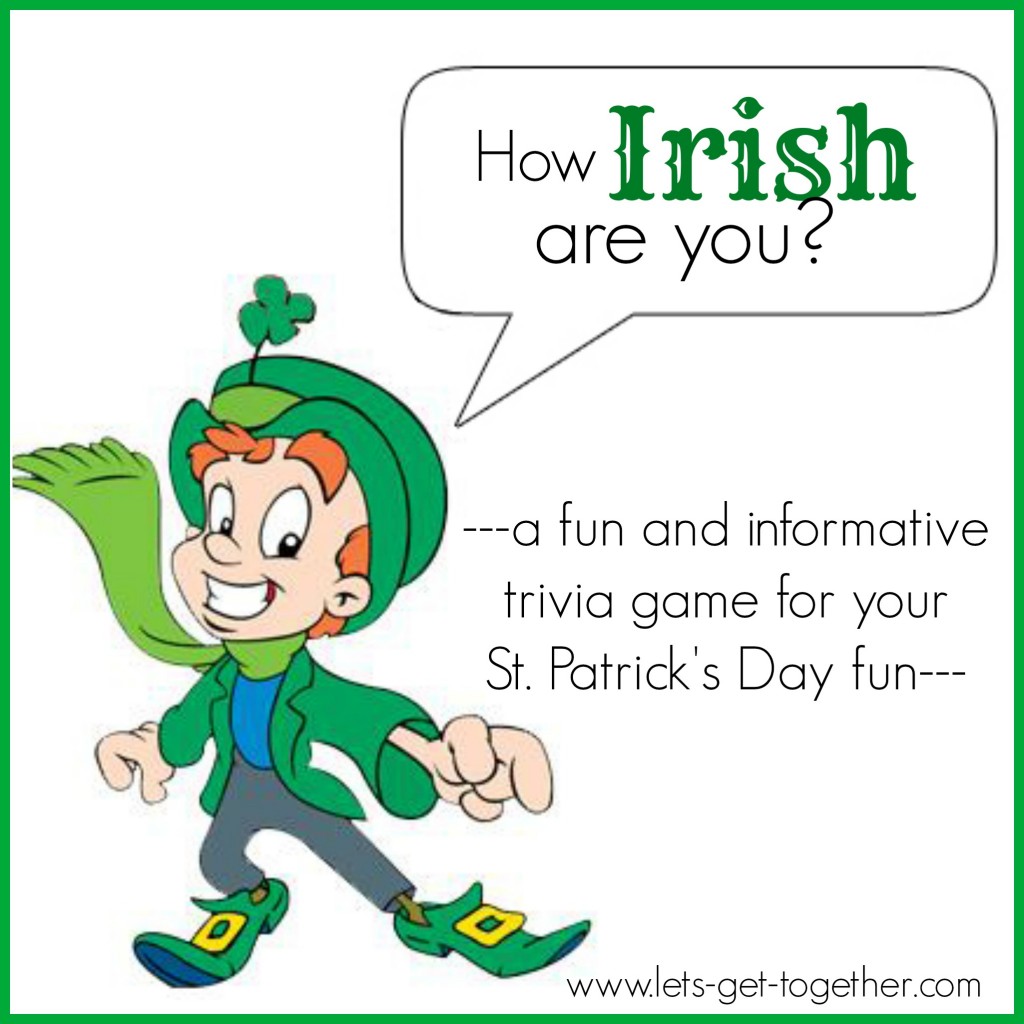 7. MAKE ME A LEPRECHAUN.  We lined up the guys and gave them some shaving cream.  When the game started they quickly put it on and then the partners standing across the table tried to throw Cheetos at them to catch in their shaving cream beards.  When the time is up, the winner is the leprechaun with the best orange Cheetos beard.  So funny!

8. GREEN CANDY DROP. Give everyone a small cup of green candies, like jelly beans or  mint M&Ms (warning: mint M&Ms are crazy delicious and highly addicting…).  Make sure you’ve counted them out so there are the same number of candies in each cup. Participants sit on bar stools or stand up and try to drop green candies from the tip of their nose into a mason jar on the ground.  It’s harder than you think! They have to sit up or stand up straight and can’t lean over.  The winner is the person that can get the most candies inside the jar when time is up or all the candy has been dropped. 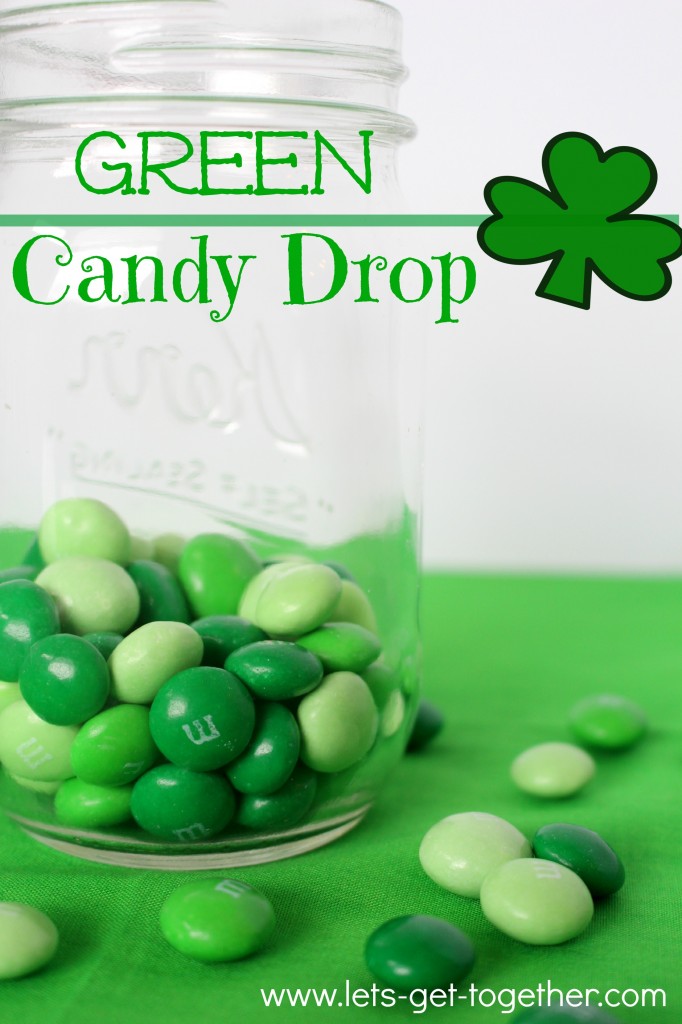 9. GREEN DESSERT.  My family doesn’t like the traditional corned beef and cabbage for dinner.  But we do love a delicious green dessert we call Leprechaun’s Delight. Find the recipe here.

10. PRIZES.  I like to keep them inexpensive and simple (no trips to Dublin). Fill a basket with green items for the winners of each event to choose from:  candy or gum, Chapstick, green pen, car air freshener, nail polish, notepad, small candle, etc. (Head to the dollar store!) I like to have more than is needed for the games, so when it’s all over, those that didn’t win can pick from the basket and everyone goes home with a little something.

May the luck of the Irish be with you!

« March: Up Your Exercise
Leprechaun’s Delight »