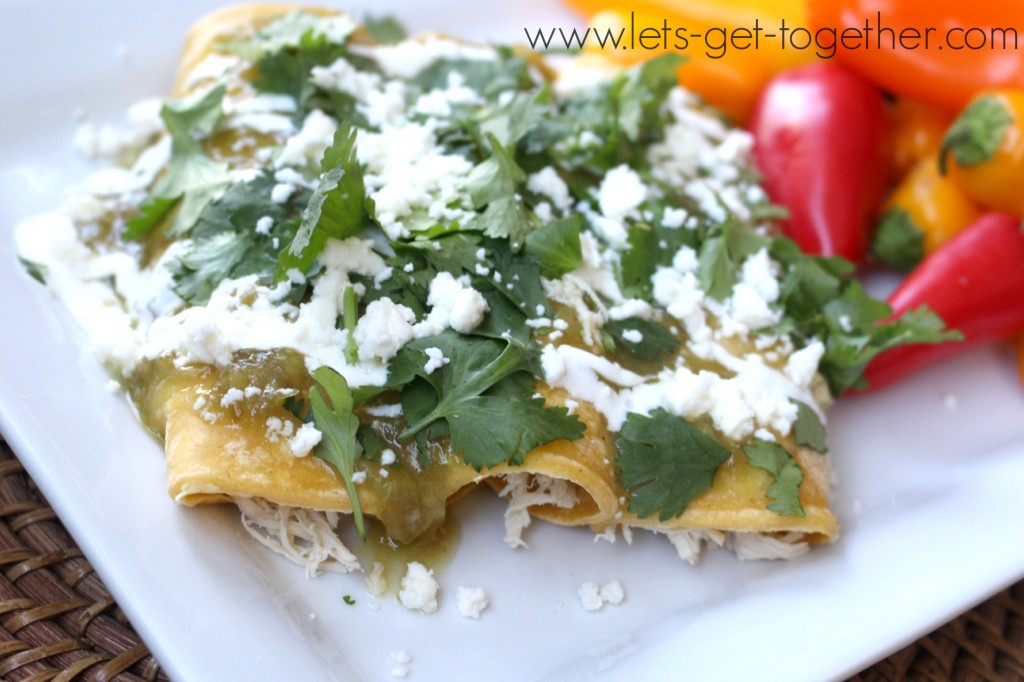 Enchiladas are a love language. At least at my house.

And this week calls for a little extra love. There’s just one more day of grad school classes for the blonde man who makes my world go round. I’m crazy proud of him, not just because he’s done so well-and he has. More because he’s worked so hard-in class, at work, but also to make time for me and the little guy in the middle of the madness.

And at our house, when food needs to scream, “I love you!” or “You’re a rockstar!” – it’s time for some enchiladas. These enchiladas.

Rewind eight years and I was serving as a missionary for my church in Southern California. I spent most of my time among native Spanish-speakers. They-and their food!-quickly won my heart. So what I’m saying is that while I don’t claim to know all of the food secrets of the best enchilada makers in the world, I know some of them. And you’re going to love these.

The star of this dish? The tomatillo.

Don’t be scared of these little guys if you haven’t worked with them before. They’re totally friendly. Just be sure to buy a little bit more (in weight) than what a recipe calls for when using them. Because they’re wrapped up in skins, you can’t always tell if one isn’t in top shape. So you’ll want the buffer of a couple extra, just in case.

Once you peel the papery skins, give them a hard rinse. They’re usually a bit sticky, so they’ll need a good rub while you’re running them under water.

Healthy Enchiladas Verdes
2015-04-27 14:25:04
Write a review
Save Recipe
Print
Chicken
Sauce
Instructions
Let's Get Together https://lets-get-together.com/
These are healthier (and have way easier clean-up!!) than your average enchilada. Instead of microwaving the tortillas to soften them up, you’d usually do a soft fry and have them sit in heated oil on the stove. Which is also really messy, and you’d be surprised at how much oil a tortilla can soak in within a few seconds.

Another way to go a bit healthier is with the sour cream. If you go to the grocery store and look in the Mexican food section (which is where you’ll find the queso fresco), you’ll also probably see a jar of crema. Crema is basically sour cream, but you’ll pay more for it as crema than just your average sour cream in the dairy section. Crema isn’t as thick as sour cream and it’s a bit saltier. So what I do is take a plastic bottle, spoon about a cup of sour cream into it and then add about 1/4 cup of milk and 1/2 tsp of salt. Then I just shake it up and serve it. It goes further and lightens up the taste.

These are perfect for your Cinco de Mayo celebrations! Oh-you can also make the sauce in the morning, throw it in the fridge, and then just reheat it in a saucepan for dinner. (It will thicken up as it cools, but the consistency will return as you heat it up again.) Love meals that I can make ahead!!

We served our enchiladas up with our favorite black beans and some watermelon. It was light, summer-y, and packed with flavor. The perfect way to say, “Peace out grad school!”

« Eating for your Immune System
Are You Ready? What To Do Before, During, & After an Earthquake »